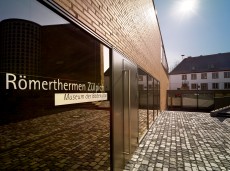 Experience 2.000 years of bathing culture - from Roman times to the present day

A complete tour of this museum provides you with an overview of the history of bathing culture. You begin with the best preserved public Roman thermae north of the Alps. Then the tour continues to the public bathhouses where you can learn about personal hygiene in medieval times. From there you go on to the first toilets and washbasins where you also become acquainted with some eccentric innovations such as bathing boats or the "rocking bathtub". Finally, you will find out about present forms of bathing and explore questions of modern water consumption.

The remains of these Roman baths were excavated during the 1930s. After their unearthing they became part of a small museum of local history (‘Propsteimuseum’) and could be visited by small groups. They were not very well known until 1997, when the local historical society decided to rethink the overall concept and settled on building a new museum. The museum opened in 2008. The new building was designed by Markus Ernst from Zülpich. Its concept caters to all the modern functional demands of a cutting edge public exhibition space while preserving and clearly displaying the historical substance. 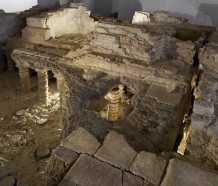 As the name "Römerthermen Zülpich – Museum of Bathing Culture" suggests, the well-preserved ruins of the Roman baths form the centrepiece of the present museum.

Built first in the 2nd century AD, the core structures of the thermae experienced a long history of modification and expansion until they went out of use and were changed into living quarters during the second half of the 4th century AD. Tolbiacum, as Zülpich was called in Roman times, was a small town (vicus) belonging to the area of Cologne but was situated at the crossings of various major roads which connected Cologne, Bonn and Treves.

The architectural remains which are still visible today show all important features characteristic for Roman baths. The rooms included a cold room (frigidarium), one or more room(s) of moderate temperature (tepidarium), a hot room (caldarium) and, in one phase, a sweat room (sudatorium). Most of the rooms were supplied with one or more bathing tubs containing water of a temperature corresponding to the surrounding room temperature.

You may examine in detail the typical floor heating system (hypocaustum), the different types of rooms needed for typical Roman thermae and the complexity of their water system. The display cases contain many objects, including cosmetics and medical instruments which demonstrate the variety of activities carried out in the baths.

HYGIENE THROUGHOUT THE AGES

In Roman times going to the baths was not just an act of hygiene but also a matter of relaxation as well as a way to meet people, chat and do business. The baths were open to everybody. Women and men had either different bathing hours or there were separate rooms for each sex if the thermae were big enough. The entrance fee was cheap in general, costing about as much as a mug of wine, thus also affordable by the poor. The large baths in Rome or other big cities might even be sponsored either by the Emperor personally or other rich politicians so that ordinary people and slaves could often bathe for free.

In addition to private hygienic matters, service features in ancient baths also included massages as well as cosmetic and medical treatments.
The latter continued during the Middle Ages. Contrary to the general view, hygienic questions played a big role in medieval times. Bath-houses existed in many towns and were a common feature of daily life, as is shown in a reconstructed typical interior on display here in the museum.

In Roman and Medieval times, bathing and washing were done in public, side by side with neighbours, friends and sometimes business partners. Only a few, rich people could afford to have their own bathrooms in their homes. With the beginning of the modern era (16th/17th centuries) hygienic matters were more and more shifted into the private sphere. Public bathhouses were closed, due to the rising costs of wood and fear of the plague.

The Industrial Revolution created new hygienic problems that were solved through technical innovations which we still use today, such as the first water closet (WC), in 1775, the first water tap, in 1848, and the first bath tub with enamel coating, in 1862. 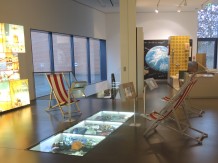 SWIMMING IN THE SEA – LEISURE TIME

As the modern work concept developed to include more net leisure time, new ideas of bathing and swimming emerged. The 19th century saw the construction of the first public swimming pools with an athletic aspect. Swimming teams for men and women as well as swimming clubs were founded.

By the end of that century it had also become favorable to spend family holidays by the seaside. Now people needed bathing attire that looked representative and was appropriate for both sexes when they appeared in public. It was the start of a new fashion style which has continued to develop in different ways to this very day.